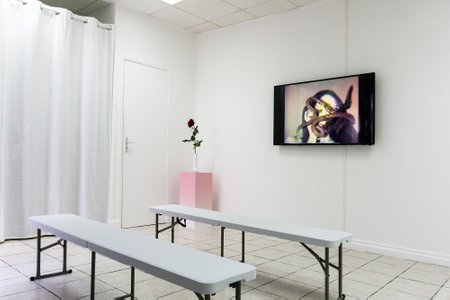 Cecelia Condit’s 1983 feminist fairytale, 'Possibly In Michigan' was recently rediscovered by tens of thousands of teenagers on TikTok following the unexpected appearance of an excerpt of the film on the front page of Reddit in 2015. The music from the clip 'Oh no, no, no….Silly' taken from ‘Possibly In Michigan’ was subsequently posted on TikTok in the summer of 2019 and the number of young performers responding to it are now over 20,000 strong.

Condit directly addresses the TikTok phenomenon in her latest film, 'I've Been Afraid' (2020) which delves deeper into song and stories of women who have been threatened.

"I've Been afraid of foxes.
Afraid of Tiks and Toxes".
I’ve Been Afraid, Cecelia Condit, 2020

Condit asserts, "a poem and not a story, like in 'Possibly in Michigan', it addresses fear, love and bogey-men that just don't go away."

At the screening, Goswell Road presents ‘Possibly In Michigan’ and ‘I’ve Been Afraid’, alongside a selection of TikTok performers selected with Condit responding to the clip.

Goswell Road would like to thank Cecelia Condit for subtitling the films especially for the screening.

Cecelia Condit (b. 1947, Philadelphia, Pennsylvania) is an American artist working in video. Since 1981, Condit’s videos have created heroines whose lives swing between beauty and the grotesque, innocence and cruelty, youth and fragility. Her work puts a subversive spin on the traditional mythology of women in film and the psychology of sexuality and violence. Exploring the dark side of female subjectivity, her “feminist fairy tales” focus on friendships, age, and most recently the natural world.